For the last forty years, our government has catered to the wealthy and to corporate America while largely ignoring the needs of the middle class and the poor. Since Reagan was elected in 1980, taxes have been lowered for the rich and raised for the middle class. Unions that once fought for and protected workers’ rights have been stripped of their power. Funding has been steadily and increasingly withdrawn from schools, making college unaffordable for many, saddling those who chose to attend with suffocating debt. Medical costs, driven by the greed of insurance and pharmaceutical companies and lack of government oversight, have made healthcare so expensive and so unevenly spread across sectors of the population, medical bills are now the biggest cause of bankruptcies. 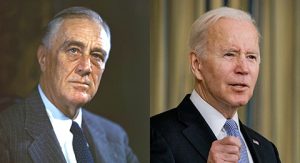 The American dream is just that: a dream. For most in the middle class, it is out of reach. For the poor, the safety net has been so shredded they face the bleakest of futures.

Both parties have been complicit in this. The last president we had who truly cared about the people and delivered for them was FDR. It was the programs he fought for that brought us out of the depression: financial reform, public work projects, Social Security, the Civilian Conservation Corp, unemployment insurance. The GI Bill of rights, signed into law in 1944, provided for low-cost mortgages, low-interest loans to start a business, dedicated payments of tuition and living expenses to attend high school, college, or vocational school. These programs, and the concomitant rise of unions, transformed America.

Our political parties, both Republicans and Democrats, have watered down, fought against, or eliminated nearly all these things. Is it any wonder so many voted for a man who promised he would change all that? He would “drain the swamp?”

(Never mind that he intended to do none of these things, that he had no moral compass, that he cared for no one but himself.)

Biden’s “Build Back Better” plan to address climate change, rein in the cost of prescription drugs and health care, close tax loopholes, lower child care and education costs, provide clean energy jobs, invest in teachers and schools, these things come closer to the transformational changes we need than anything since FDR assumed the presidency on that cold, rainy day in March of 1933.

Subscribe and receive a free chapter from Rita Welty Bourke's book, Kylie's Ark: The Making of a Veterinarian.